7 Oct: Too much to do and so not much gets done

Autumn arrived at the exact same time that I returned from a month-long holiday in the States. The result of these two events, which frankly I should have anticipated, was a feeling that there was simply too many things to do in the garden. Predictably, this has lead to a week of almost nothing happening as I flitted from one bit of the garden to another, fretting and planning, weeding this and that and then, restlessly, moving on. 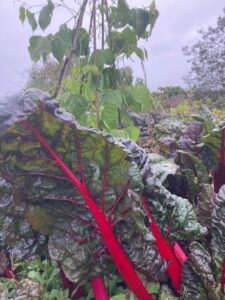 The veg garden is a mess but the chard is, well, epic

d (see photo)? What about my various small hedges and balls, all of which were now overgrown? Also, what about the perennials! They needed dividing. Plus I had thought about buying a hazelnut tree. And I always seem to be planning to buy some wintersweet …

Then there are the pots! So many pots that need, well, repotting and reorganising. And the bulbs! The bulbs, the bulbs. First I needed to have a rethink on what I really wanted (bright red? Really? Just because my mother loved them. Well, OK, then, yes….).

So I did have a rethink. I even bought some bulbs at the market in Bakewell, having perused the Sarah Raven website and given up because there was simply too many choices. (Plus, last year, I ordered some tulips and only half arrived as the others were, apparently, out of stock though I would have appreciated knowing sooner.)

The net result of all of this faffing about? I have weeded three/quarters of the front border and most of the veg patch. I have also transplanted 12 of my 30 or so strawberries (yes, I know, it’s the wrong time of year for this with strawberies but I suspect they will survive). I have also photographed my giant chard and eaten many of the autumn raspberries that escaped over the years into my woodland area where, against all odds, they appear to thrive. Plus I’ve made a plan to get a plan for next week. We’ll see how that goes….

No comments to show.